Well folks, I finished it.

This monster of a post that split off into two parts with a spin-off post still incubating (it’s going to take some time for me to recover before THAT one will ever be complete).

On my blog, I split a deconstruction of The Dark Knight into two parts: the encompassing, heroic plot, and the tragic plot it was built around.

Grab some popcorn and get ready to geek out.

To read through the scenes of the movie chronologically, start with Batman. Then follow the links to teleport between the two posts. I’ve got to warn you, though, it’s a total of 5769 words. Plus there’s a spaghetti-like tangle of links to hop you back and forth. This is no two-minute read.

To read a deconstruction of the main storyline (with a quick diversion or two into Harvey’s POV), read the Batman / Bruce Wayne half of the story (3714 words). 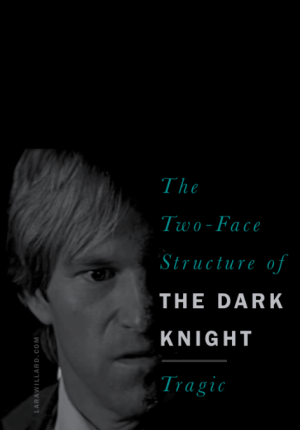 To see how the Nolan brothers wrote Harvey Dent as a tragic hero, read Harvey’s half of the story (2055 words).

And hey—stay subscribed. That incubating post I mentioned earlier? It’s about planning and plotting trilogies. I might have it completed in, say, 2021.

There’s nothing quite like having a great group of writer friends. Who else gets you when you’re crying for your characters as you write them? Who else understands what it’s like to face the daunting task of revision? Writing community can be a really good thing.

Writing community can also go really wrong. If you try to start a writing group without putting thought into the goals and participants of that group, you might end up with something that will fall apart at best and be detrimental to the members’ writing at worst. If you’re going to connect with other writers, be careful and on guard against the following common pitfalls.

Sometimes, writers give each other too many pats on the back. It’s important for the members of a writing group to encourage each other in their art, but not at the expense of quality. There may be many different styles of writing that can work, but a good group of writers will tell each other whether or not the way they’re using those tools does work. Constructive feedback is more important than positive feedback.

Sometimes, writers take too much pleasure in tearing each other apart. This happens especially in workshops and other more academic settings. Critique partners or groups are quite helpful when a writer wants advice on how to strengthen their writing, but some people go too far. Instead of giving helpful feedback, they tear apart each others’ writing in a way that belittles instead of building up. Being critical of peers is only a good idea when it has a useful purpose.

Sometimes, writers form a writing group without following through with consistent writing. They love the idea of being in a writing group, but they never put forth the work to make it constructive. One of two things quickly happens to this type of group: it falls apart as people drop out, or it becomes a social gathering. Social gatherings for people who love words are great, but if the members aren’t writing, it’s not a writing group and shouldn’t be mistaken for one.

Sometimes, writers get excited about sharing their own work without showing any excitement for each other’s work. This creates a group where people are writing, but they’re not getting a lot of constructive help from their community. If everyone shows up for a writing group expecting feedback on their own work without paying attention to others’ writing, what happens? There’s nobody to read, so nobody actually gains. If nobody is willing to give, the group becomes meaningless.

Sometimes, writers don’t communicate their different ideas about what they want in writing community. When they come together, a conflict arises as everyone expects something different. One person might be expecting to give and receive detailed style advice, while another might simply want to exchange comments on overall big-picture elements. While both are valid ideas for a writing group, advice won’t be helpful if it’s not welcome. Writers should make sure they are clear about their expectations before exchanging their work. Otherwise, their conflicting goals will lead to frustrated results.

6. People have no goals.

Sometimes, writers come to a writing group without any plan or expectations. They know they want to be in a group of writers, but that’s about it. They expect that things will just fall into place naturally. While it’s good to be flexible and make changes based on what does or doesn’t work, there still needs to be a starting plan to give the group purpose. Writers with no goals or direction aren’t likely to get anything done.

7. People aren’t a good fit for each other’s needs.

Sometimes, writers won’t have enough experience or interest to comment on their peers’ work. People write in a variety of genres and styles, and not just anyone will give the best feedback to another writer. While any feedback can be helpful, the best feedback comes from someone who reads, understands, and preferably writes what they’re critiquing, whether it’s poetry, nonfiction, or one of many specific fiction genres. If a reader doesn’t know a genre, they’re not going to be able to give helpful tips on genre-specific needs.

This all may sound like a lot of negativity, but it serves two purposes. The first is to help you stay out of the wrong groups. If you know what to watch out for, you’ll save yourself some time and frustration. The second purpose is to help you make your current community into a better one. If you love your writing clan but don’t love what you do or don’t do for each other, identifying your weaknesses can help you turn them into strengths.

Getting a productive writing group together can be tricky, but if it works out, it’s worth it. Even if it doesn’t work out, don’t give up on the community of other writers out there. Your fellow writers aren’t your competition—they’re your companions on this journey. Take the time to support and encourage each other whenever you get the chance, and you’ll quickly see how very right writing community can be. And guess what? The more writers you get to know, the more opportunities you’ll have to find that writing group that doesn’t go wrong.

I don’t know about you, but 2016 left me with several serious dry seasons when it came to creative juices flowing.

Sometimes, for our mental, emotional, or physical health, we need to take a break.

Absorbing information, researching, and being entertained are all parts of the ten steps for writing a novel.

I once wrote that there’s no such thing as writer’s block—you’re just not writing. I still think that’s true. Last month, my family got a new Windows tablet that is pretty much 98% useless. The other 2% is the solitaire games I haven’t played since I switched to MacBooks my freshman year in college.

This has a point, I swear. Have you ever played Freecell? It’s a solitaire game in which very few deals are unsolvable. Playing Freecell is even easier on the computer, because you can use the undo button to back up indefinitely. Since I started playing again, I haven’t played a game I couldn’t beat, even if I had to back up a hundred steps before moving forward again.

Sometimes writing is like that. You get to a point that seems impassable, and sure—maybe it is impassable—but most of the time, you can either back up and try again, or you can cheat your way through. Throw in some extra cards. Let a toddler trample through your game. (These latter two scenarios are only recommended metaphorically or with real cards. Don’t let your toddler trample on your computer or tablet.)

Stuck in your story? Try to write yourself out. Write everything that couldn’t happen, and figure out a possibility through the process of elimination. Getting stuck isn’t always bad. In fact, if you don’t know how you’ll get your characters out of a sticky situation, neither will your reader. You’ll surprise everyone when you come up with a solution. That’s better than having a story that is predictable.

Sometimes, though, it’s not your story that’s the problem. Sometimes it’s not writer’s block, it’s human’s block. Maybe you were overwhelmed by international politics. Maybe you’re a wreck because your mom just died. Maybe you lost your job and aren’t sure how to make ends meet.

Sometimes we just need to survive before we can thrive.

If you’re in that spot, you’re not alone. Do whatever you need to do to be safe and healthy. Don’t let creative guilt make you feel worse. Tell that guilt to zip it until it can be properly motivating instead of devastating.

Then, once you’ve got survival down, or when you’ve gotten enough help that you can start living again, ease back into ideation and creativity.

Write down things you observe.

Record the weirdest questions and fascinations you can think of.

Consume your favorite art and stories to remind you why you want to create in the first place. (I recommend Hamilton for entertainment, inspiration, awe, and catharsis.)

Know which sensory techniques work for you so you can better calm yourself in the future (the following are just a start):

And when you feel ready, start writing. Last week, Kyra wrote about time management as she pursues her doctorate.

This week I’m finishing my last editing projects of 2016 to focus on my own writing (not to mention my family and full-time day job as a copywriter). So Kyra’s blog post was especially timely for me, as was today’s post by Chuck Wendig on finishing your writing.

How will you turn off the internal editor to write that first draft quickly?

If you need a bit more distraction or advice before you get started, take a look at Chuck Wendig’s post: Here’s How to Finish that #^@&*%$ Book, You Monster. As per usual with Chuck Wendig, his posts have NSFW language, so read at your own risk.

What is the one project you’ve been putting off? Can you come up with a SMART goal to achieve by the end of 2016? Comment below!

Share your progress with Snapchat stories so others can be inspired, too! (Add me @larawillard)