I don’t know about you, but 2016 left me with several serious dry seasons when it came to creative juices flowing.

Sometimes, for our mental, emotional, or physical health, we need to take a break.

Absorbing information, researching, and being entertained are all parts of the ten steps for writing a novel.

I once wrote that there’s no such thing as writer’s block—you’re just not writing. I still think that’s true. Last month, my family got a new Windows tablet that is pretty much 98% useless. The other 2% is the solitaire games I haven’t played since I switched to MacBooks my freshman year in college.

This has a point, I swear. Have you ever played Freecell? It’s a solitaire game in which very few deals are unsolvable. Playing Freecell is even easier on the computer, because you can use the undo button to back up indefinitely. Since I started playing again, I haven’t played a game I couldn’t beat, even if I had to back up a hundred steps before moving forward again.

Sometimes writing is like that. You get to a point that seems impassable, and sure—maybe it is impassable—but most of the time, you can either back up and try again, or you can cheat your way through. Throw in some extra cards. Let a toddler trample through your game. (These latter two scenarios are only recommended metaphorically or with real cards. Don’t let your toddler trample on your computer or tablet.)

Stuck in your story? Try to write yourself out. Write everything that couldn’t happen, and figure out a possibility through the process of elimination. Getting stuck isn’t always bad. In fact, if you don’t know how you’ll get your characters out of a sticky situation, neither will your reader. You’ll surprise everyone when you come up with a solution. That’s better than having a story that is predictable.

Sometimes, though, it’s not your story that’s the problem. Sometimes it’s not writer’s block, it’s human’s block. Maybe you were overwhelmed by international politics. Maybe you’re a wreck because your mom just died. Maybe you lost your job and aren’t sure how to make ends meet.

Sometimes we just need to survive before we can thrive.

If you’re in that spot, you’re not alone. Do whatever you need to do to be safe and healthy. Don’t let creative guilt make you feel worse. Tell that guilt to zip it until it can be properly motivating instead of devastating.

Then, once you’ve got survival down, or when you’ve gotten enough help that you can start living again, ease back into ideation and creativity. 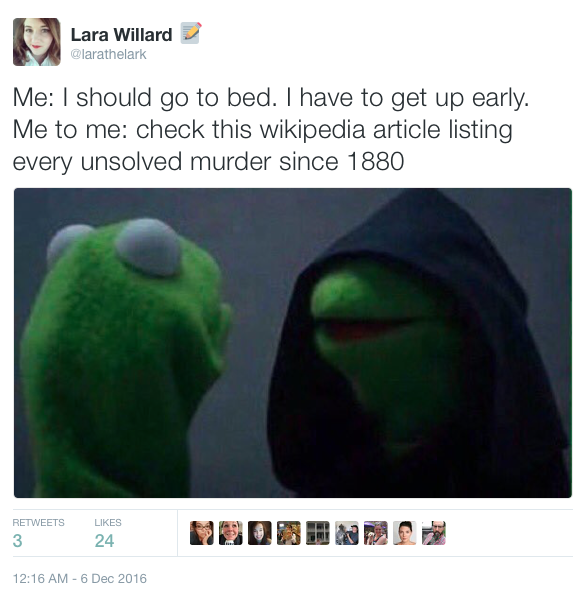 Write down things you observe.

Record the weirdest questions and fascinations you can think of.

Consume your favorite art and stories to remind you why you want to create in the first place. (I recommend Hamilton for entertainment, inspiration, awe, and catharsis.)

Know which sensory techniques work for you so you can better calm yourself in the future (the following are just a start):

And when you feel ready, start writing.

4 thoughts on “The Creative Cycle”