This past week I tagged along to my husband’s company-wide annual meeting, expecting a lot of alone hotel time, some coffee shop stops and few ‘mandatory fun’ events. But this year had some pleasant surprises in store.

The very first meeting, Blake Mycoskie, the founder of TOMS shoes, walked onto the stage! (At this point you’re probably wondering what this story has to do with writing at all. Patience, my friend.) 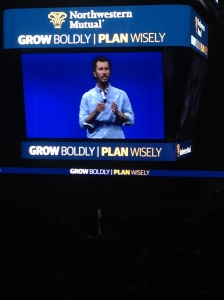 Of course, his story of TOMS was inspirational, funny and tear jerking. But very quickly I began to realize that what he learned as an entrepreneur could be easily applied to the writing life as well.

Entrepreneurship and writing both share many themes. Both involve ideation, inspiration, and a lot of hard work. The following ideas are concepts that Blake shared and that I want to pass forward. I hope they bring you the focus and inspiration they’ve already brought me.

Give ideas a chance

When Blake birthed the idea of TOMS shoes, he had just finished a day of delivering shoes to kids in Argentina. To him, it was just a thought about how to keep kids in shoes and, ultimately, in school. But the next day when he shared it with an Argentinean friend, the friend was ecstatic. This friend’s passion and belief in the idea began to rub off on Blake, and before he knew it, they were making shoes out of a couple Argentinean garages.

The point: Give your ideas a chance. If a book, story or character comes to you in the wee morning hours, or while sitting at your desk at work, run it by a friend and see what they think. You might be surprised how quickly your idea can take shape if you just give it a chance.

Practical tip: Start an idea notebook. Make sure it’s small enough to carry with you, so as ideas come you can jot them down.

Learn from your critics

As TOMS began to take off, it wasn’t long before the very public criticism came. At first, Blake was angry. Couldn’t they see how many people he was helping? Then, he ignored them. Finally, he decided to listen. He invited some of his critics into his office to really hear them out. What he soon realized was that some of their critiques were actually true. Even though he didn’t like the way they went about it, he was able to learn from the critics and improve his business-model.

The point: Maybe you won’t always like how someone criticizes you, but that doesn’t me what they say doesn’t hold value. Do your best to evaluate what you can implement to improve your manuscript.

Practical tip: Check out Kyra’s post on getting the most out of your critique!

Blake was the first to admit that he wasn’t exactly shoe-savvy. So when things began to take off, he knew he needed to hire some experts in the field. He quickly hired a few people with previous experience at some of the largest shoe distributors. Later, when his people said it was time to diversify his shoe inventory, he listened. TOMS continued to explode.

The point: If you’re having trouble getting your MS off the ground, it’s probably because you’re in need of some expert insight. Find experienced editors, query experts, and agents to help you along the way. There’s no shame in getting help, and it’s pretty unrealistic to think you can do it all on your own.

Practical tip: Start with (non-friend) beta readers, then get yourself an editor and go from there.

What’s your next step?

Now that you’ve learned from Blake, what is your next step? Do you simply need to jot down some ideas? Do you need to re-visit criticism or pursue an editor? Whatever the case, I hope you give your MS a chance and start to write like an entrepreneur!

2 thoughts on “Writing Like an Entrepreneur: Learning From the Founder of TOMS Shoes”